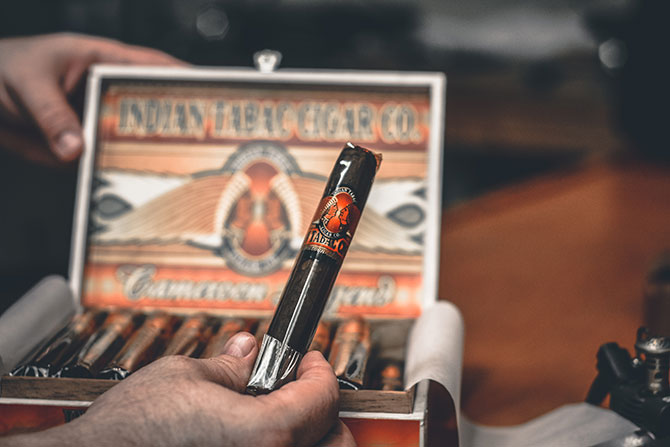 Many of the tobacco rituals we cherish come down to us from Native American cultures. Used in ceremonies, tobacco was the centrepiece of many rites and used as an offering to the spirits. Before setting out on a journey an offering of tobacco ensured safe passage; a pinch of tobacco marked the beginning of a hunt and its successful return.

And smoking ceremonies were used to seek protection. Naturally then, welcoming a new life into the world required partaking of this time-honoured tradition.

As the practice spread across America and beyond, men the world over began to accompany worried pacing outside the delivery room with a cigar. As the author E.G. Bulwer-Lytton wrote “A good cigar is as great a comfort to a man as a good cry to a woman.” As men waited and calmed their fears, maybe in some way they also sought protection for this new and fragile life.

New life makes us think about tradition and what we pass down to our children. A new father waiting to see his child for the first time might imagine his own father doing the same at his birth and his father’s father, back through the generations. Perhaps he looks forward too, seeing his children welcoming their own new babies into the world years into the future.

Another culture with a long cigar tradition is Great Britain. A people known for their stiff upper lip, perhaps jumping for joy and pride wasn’t an option. Instead, the stoic British gentleman channelled his happiness and pride into a quiet smoke. We can imagine him passing around cigars to friends and family with a barely-contained smile.

Cigars are not manufactured, they are crafted and they are not smoked but rather savoured. As the saying goes “There’s a quality, a workmanship, a passion that goes into the smoking of a fine cigar.” What better then to celebrate a new life 9 months in the making?

Whichever type of new father you think you might be, the ceremonial smoker, anxious pacer or proud stoic, there is a cigar tradition for you. Men nowadays are more likely to be present at the birth and of course hospitals are very different environments than they once were. Nevertheless, it is still important to find space and time to mark the arrival of a new person into the world, to fortify yourself for the awe-inspiring responsibility of fatherhood and to invite friends and family to share in the moment with you.